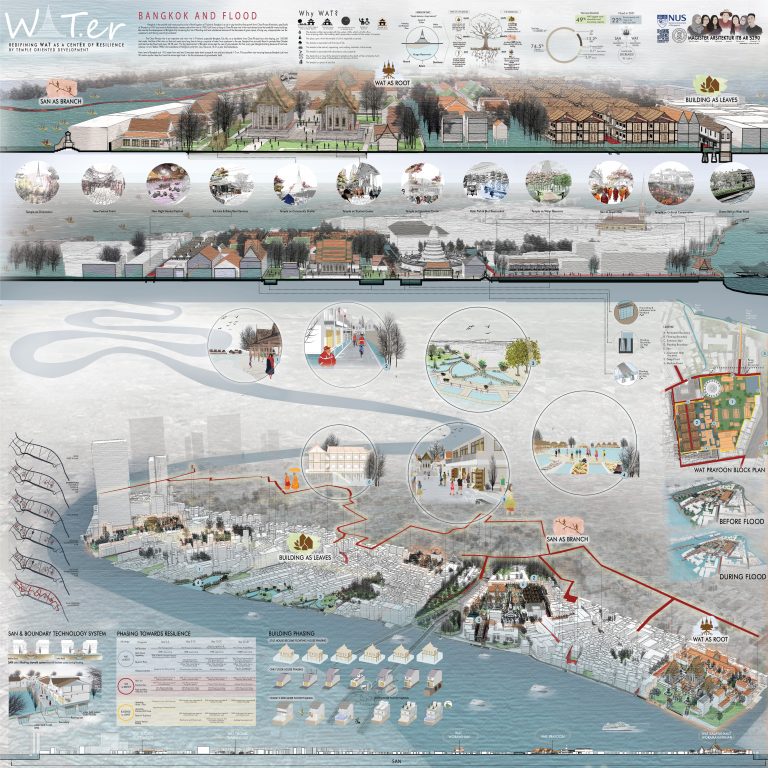 WAT. ER: Redefining WAT as a Center of Resilience

Flood and land subsidence is an issue that still exists and is a concern of Bangkok’s development to date. Kadeejeen Khlong San is one of the areas on the banks of the Chao Phraya river. Site has many cultural objects but not so developed as the east side of bangkok and potentially to be devel­oped as a representation of bangkok city which has many temples.

Our proposed design approach is to form Wat as a center of resilence by Temple Oriented Development. It is applied by intervent Wat as huge water reservoir both during normal rainfall and during big floods cycle. Temple as a second biggest area in site are potential become center of re­silience by create Wat as shelter for people when the great flood occurred. This approach is phylosophized with the Bodhi tree as the tree of life for Buddhists. The site is related to Bodhi tree where Wat as the root that ab­sorbs and reserves rain water, reinforces the area with cultural character, and revives the area with its water source and tourism economy. Buildings as leaves that must have benefits value to the surrounding both for Wat and for the surrounding community, such as leaves that use water from the roots to produce food and redistributed throughout the Bodhi. San as branches that form a braid between the building (leaves) and Wat (roots) both as a channel of water from wat to the building and become a path for residents from building to wat.

This approach could be applied to all temples in Thailand especially in Bangkok. Thus, the risk of flooding and land subsidence could be reduced, increasing ground water aquifer, and of course increasing the resilience of the community towards flooding.