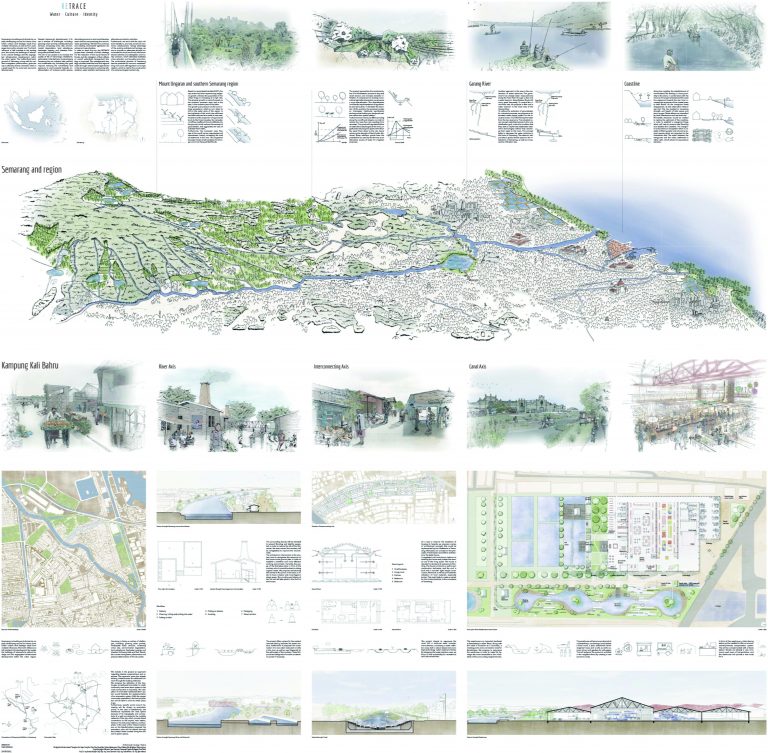 RE TRACE follows the invitation to the 2017 DRIA competition to present urban design proposals responding to droughts, subsidence and flooding in Semarang, Indonesia with a focus on the district of Kampung Kali Bahru.

Semarang is a bustling and vibrant city, rapidly developing around its historic core (Handayani 2014). Urban culture and heritage result from multiple influences, as well as from exchanges during the colonial rule. The Dutch influence is still manifest in the trading port, the canals, the buildings of relevance to cultural heritage and the segregated infrastructure development within the urban region (Handayani 2014). The multicultural background of Semarang, along with the current immigration phenomenon, gives the city a culturally diverse character, which is a great asset for its social and economic development.

The aim of our project is to increase the quality of life of Semarang’s inhabitants, particularly in Bandarharjo, by developing Semarang into an inclusive, safe, resilient and sustainable city (Resolution 2015). Achieving this goal requires reducing the vulnerability and exposure to environmental hazards, implementation of inclusive public spaces, stimulating economic and social development without compromising the environment, generating a life free from violence, and creating incremental egalitarian development opportunities.

In order to reach this aim, the RE TRACE project team devised a comprehensive and holistic strategy. For the reduction of the causal factors of floods, and the mitigation of their effects, an overall watershed management strategy is proposed. This management strategy considers both the local and regional scales through nature-based approaches in the short and long-term, including reforestation, water retention techniques, and alternative production activities (Marfai 2008, Planchot 2015)

Furthermore, we work with the city’s cultural identity to promote social and economic development. Taking advantage of the existing architectural heritage, we aim to provide an adequate physical environment for social, economic, and recreational activities and strengthen community cohesion, which ultimately facilitates crime reduction and equality promotion (Crowe 2000). The multicultural dynamic of Semarang has the potential for common understanding and social self-regulation and organization, which is vital for the construction of a social-ecological resilient city (Wilkinson 2012).