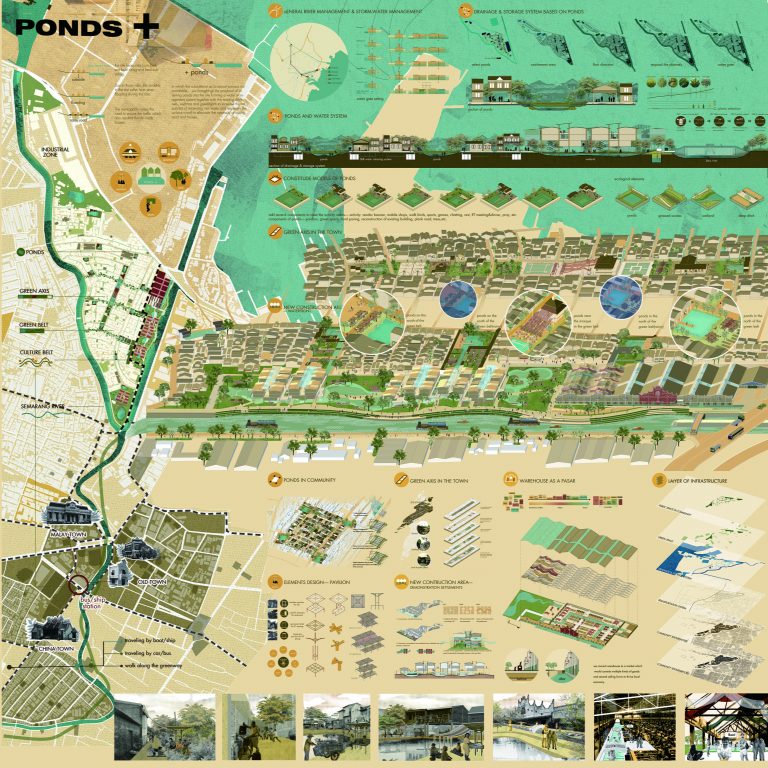 Since the mountain torrent flows mainly through the west canal and the east canal, Bandarharjo could hardly invaded by torrent. By contrast, the west canal and east canal are under the risk of flooding. Bandarharjo, at the same time, facing the problem of water logging caused by rising sea level and subsidence. In order to achieve resilience of the Semarang River and response to water logging, as well as solve the flooding problem in west canal, we  made 5 changes including setting water gate, open sluice, ship lock, pump station and excavating the river. After these changes, the only problem Bandarharjo faced is rainwater logging. The rain water logging in Bandarharjo is mainly caused by rising sea level and land subsidence.

In which the subsidence as a natural process not avoidable, we brought up the proposal of inserting ponds into the site forming a water management system together with the existing ditch nets, swamps and green lands to increase the capability of retaining rain water and decrease the surface runoff to eliminate the necessity of raising roads and houses. The use of ponds could effectively reduce the situation of the rain flowing into residents’ house. Thus, the most serious problem caused by land subsidence can be solved. Based on the design of the ponds, we use the buildings and constructions surrounding the ponds to create active community atmospheres, which is called PONDS + mode.

In conclusion, the ponds can not only solve the rain water logging caused by land subsidence, but also activate the community and surrounding area.