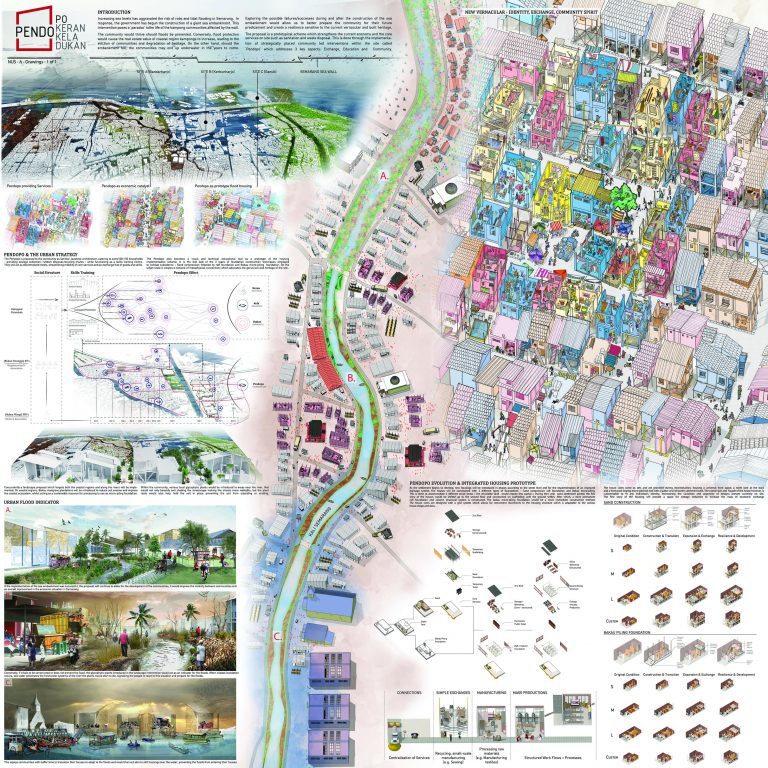 This project attempts to address the speculative situation of the present to future effects of the success/failure of the government’s efforts in resolving the floods. It proposes a prototypical implementation which occurs in phases which focuses on the community’s development economically to prepare them for future expansion/response to possible floods.

Development will focus on improving the core services on site, such as basic sanitation, sewage, rubbish disposal and community service spaces through the implementation of a community-led intervention called the ‘Pendopo’. The Pendopo will be strategically placed across the site distributed according to different Rukun Wargas (RW) on site. The Pendopo is a community space which addresses 3 main aspects: Exchange, Education and the Community. It creates a metaphysical connection across the whole site which advocates the genus loci and heritage of the site. It acts as the model for how the prototype housing can be constructed.

Concurrently, the coastal regions will be populated by Bakau mangrove plantations, which would act as a sustainable construction material for building foundations. Simultaneously local glycophytic plants are introduced along the rivers to enrich and revitalize the river. Furthermore, they act as an indicator when coastal inundation occurs. Visually as saline water enters the freshwater river system, it would cause the plants to die. This equips the people with buffer time to prepare and adapt their houses react to the floods.

The housing develops in phases together with the implementation of drainage infrastructure which transitions from the areas closer to the rivers and moves inward. The houses are incremental houses which are designed to be dynamic, allowing them to act as stilt housings in the time of floods. The basic core foundations and infrastructures are adaptable to any site, while allowing for the flexibility of being fully customisable to the people’s liking.

Pendopo – Known as ritual spaces primarily for ceremony, and for receiving the guests of aristocrats, and as cottage industry work spaces in Javanese Culture.

Rukun Warga – (Citizen’s Association) Village is the lowest level of government administration in Indonesia. A village is divided into several community groups, these are know as Rukun Wargas

Glycophytic – any plant that will only grow healthily in soils with a low content of sodium salts (e.g Freshwater plants)

Genius Loci – The prevailing character or atmosphere of a place. The spirit of the place.

Heritage – history and cultural identities of people on site, including their traditions, customs, celebrations, and special skills.