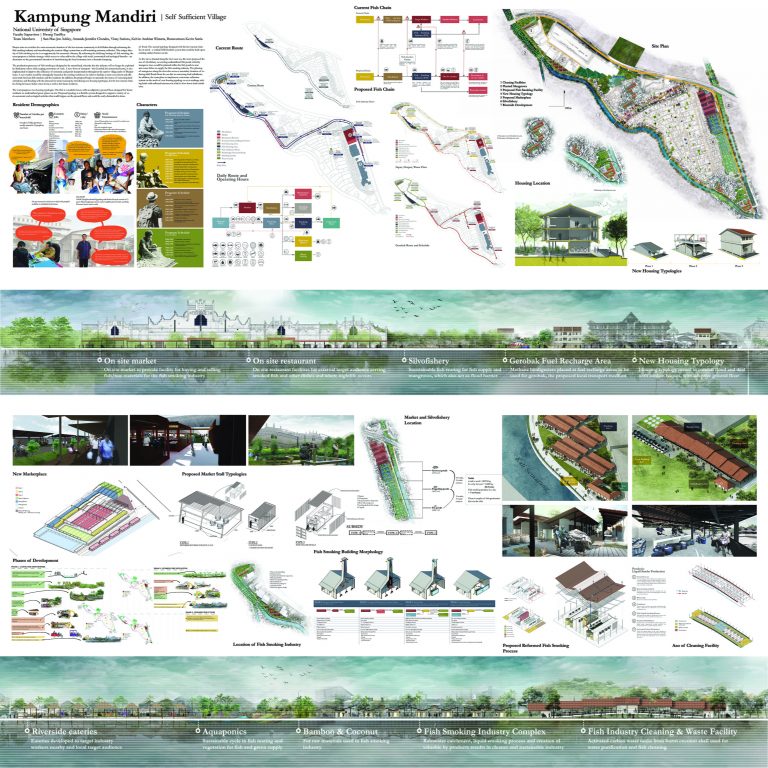 Project aims to revitaliSe the socio-economic situation of the low-income community in Kali Bahru through reforming the fish smoking industry and transforming the current village system into a self-sustaining economy collective.

The unique identity of fish smoking on site is an opportunity for economic vibrancy. By reforming the declining heritage of fish smoking, the team proposes a  holistic strategy which serves to value-add to the village with social, economical and ecological benefits – an alternative to the government’s intention of transforming the local commune into a thematic kampung.

The production processes of fish smoking is designed to be streamlined, whereby that the industry will no longer be exploited by third party sellers while reaping economies of scale. A new form of transport – the Gerobakhias (motorised carts), is also implemented to improve the efficiency of commute and goods transportation throughout the narrow village paths of Bandarharjo. A new liate a more convenient and efficient trade between fish smokers and the residents.

In addition, the proposal hopes to reconcile the issues of worsening land subsidence and flooding with the demand for more housing by introducing new housing typologies, for the low-income families living in houses below street level, as well as for future residents.

The team proposes two housing typologies. The first is a modular house with an adaptative ground floor, designed for future residents on under utilised green spaces on site. Proposed typology is a flexible system designed to support a variety of socio-economic and ecological activities that could happen on the ground floor, and could be easily dismantled in times of flood. The second typology designed with the low income families in mind – a vertical infill modular system that could be built upon existing sunken houses on site.

As the site is situated along the river near sea, the team proposed the use of silvofishery on existing underutilised fish ponds whereby mangrove trees would be planted within the fish ponds to rear mix-water fishes to supply the fish smo-king industry. The planting of mangroves along the river also serves a secondary function of reducing tidal floods from the sea due to worsening land subsidence. In addition, the team plans to implement a rainwater collection system on the roofs of new housing typology so as to recharge sinking lands with collected rainwater in a bid to slow down land subsidence.