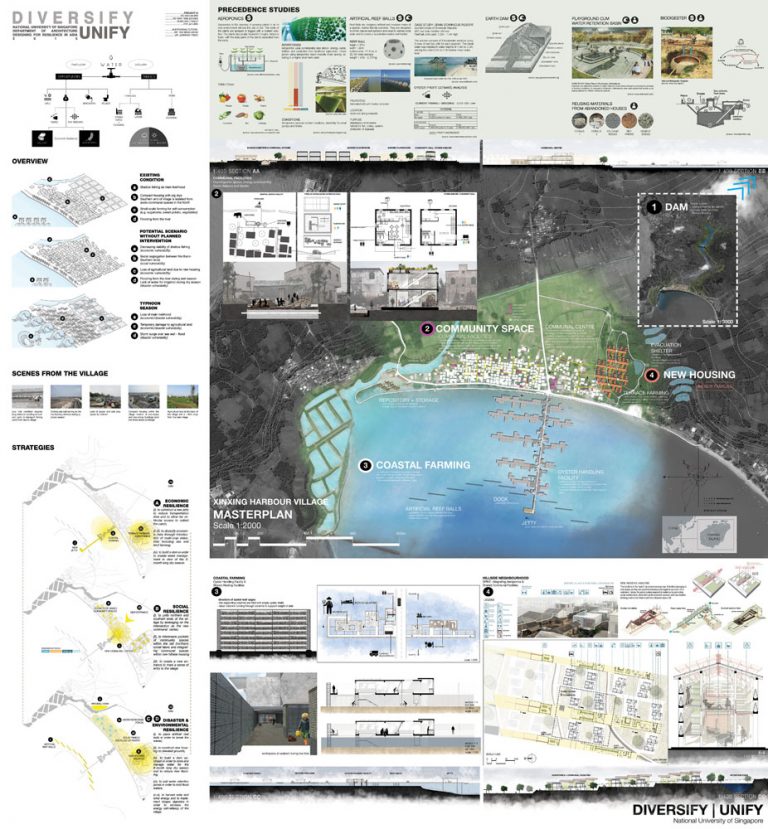 Xinxing Harbour Village has a monocrop economy of shallow fishing, supplemented by subsistence farming within the village. A single typhoon could possibly wipe out the entire village just by destroying their sole livelihood. To reduce the impact of the damage in the village caused by a typhoon or flooding, the first step would be to diversify the risk of economic losses by introducing new, high-value crops (i.e. transition to a multi-crop economy) with some located on higher grounds away from flood prone zones. As such, the village would then have an increased capacity to absorb shock and thereafter be equipped with the financial ability to invest in disaster and environmental infrastructure.

The growth of the village is driven by contradictory forces – new houses are built next to old ones (laid in a structured layout) following a loose linear pattern (organic but haphazard). The current communal space is located in the north of the village isolating residents from the southern part. To unify the new and old communities and circumvent internal alienation within the village, there is a need to rethink where and how to build/enhance communal spaces.

In response to the physical threat of typhoon and flooding, a diversity of measures are taken to alleviate the impact of natural disaster. Infrastructure for new economic crop such as oyster reef farming also doubles up as typhoon defence. Decentralised evacuation shelters provides support for villagers during the typhoon. Pockets of multi-function communal space located across the village protects homes by retaining flood water during the typhoon seasons, while functioning as social spaces for villagers for the rest of the year.

In conclusion, our design philosophy is grounded in the belief that endowing resilience in a village community requires a three-prong approach that are inter related: economic resilience, social resilience, and disaster and environmental resilience.