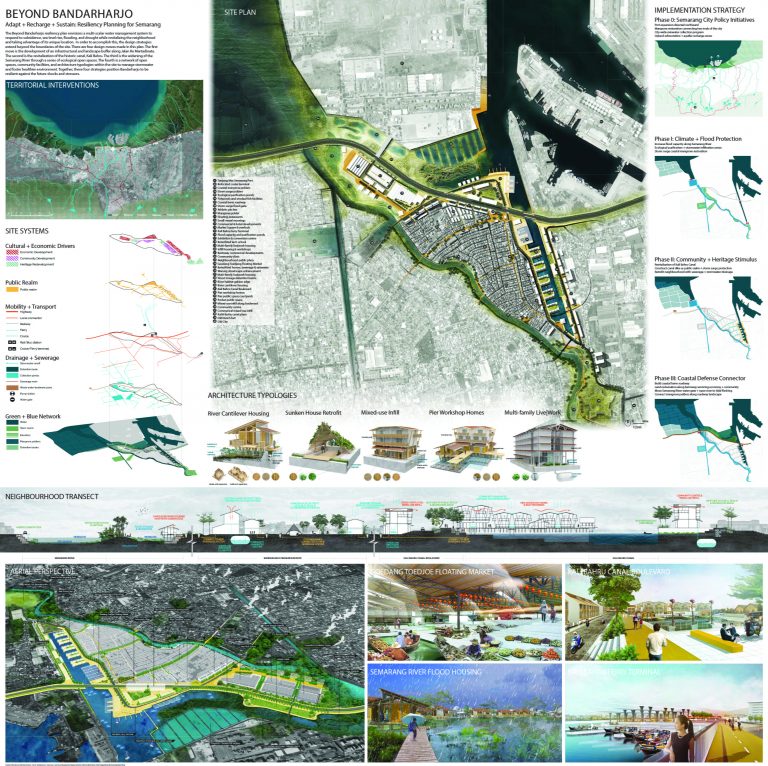 The Beyond Bandarharjo resiliency plan envisions a multi-scalar water management system to respond to subsidence, sea level rise, flooding, and drought while revitalizing the neighborhood and taking advantage of its unique location.  In order to accomplish this, the design strategies extend beyond the boundaries of the site.

Four territorial design moves are proposed to tackle resilience at the city and regional scale.  The first is directing the growth of Tanjung Mas Port out to sea rather than laterally along the coastline.  The second is the development of upland freshwater reservoirs and reforestation efforts to service water supply and address subsidence and downstream flooding.  The third is the creation of a continuous coastal mangrove buffer along the coastline from the east to the west end of the city.  The fourth is a coastal protection landscape infrastructure to protect the whole of Semarang from storm surge and sea level rise while enabling economic development.

For Kelurahan Bandarharjo, there are four design moves made in this plan. The first move is the development of an infrastructural and landscape buffer along Jalan Re Martadinata.  The second is the revitalization of the historic canal, Kali Bahru. The third is the widening of the Semarang River. The fourth is a network of open spaces, community facilities, and architecture typologies within the site to manage stormwater and foster a healthier environment.

Together, these territorial and site strategies position Bandarharjo to be resilient against the future shocks and stressors, while acting as socio economic drivers.