The urban design entry “infiNATURE” by the ITB is based on a highly analytical and comprehensive approach that reacts the local circumstances. The entry is using some elements of the local tradition and local materials, and is generally inspired by nature. The highlight of the entry is its highly innovative spatial design that provides an insight into the city of the future. The jury particularly appreciated adaptive and flexible elements of the proposal, such as its shifting focus on macro, micro, and meso levels, suggested phases of implementation, modular construction, diversification of public spaces and the general promotion of adaptive reuse. Some of the critical elements involve the lack of elaboration of public urban spaces, as well as the suggestive spatial formulation and organization of the new structures. The innovative design is highly elaborated and offers a strong idea for a new urban design in Singapore.

The “Weaving with Nature – A Future Adaptable Community” urban design entry by the SCUT is based on comprehensive analysis, with a strong focus on the current local and global challenges. The proposal is also characterized by a high level of elaboration, which is also present in consideration of diverse aspects of environmentally friendly design. The special quality of the design entry promotes far-sighted approach in terms of resident’s changing structure and the customization element in the design and usage of housing units. The jury equally approves consideration of many other various local sustainability challenges, including food supply. On the other hand, although highly detailed, the overall design solution leaves the impression of a slight uniformity and high density, which further underlines the questions of interaction and connections on various levels. The highly detailed considerations on the integration of infrastructures into a blue-green environment distinguish the design to a great extent.

The “Bending the Current” urban design entry by the UDM is based on a highly analytical and comprehensive approach. The design concept is strongly based on the aspects of food sustainability, as an element that gains on attention globally. It therefore promotes urban agriculture with central agricultural belt that additionally emphasizes the qualities of multifunctional urban space, which is central for the suggested concept of self-sufficiency and integrated in the “changing the mindset” of the local population. The jury particularly praised the exceptional architectural design, the reliance on renewable and local materials, and suggested development in phases. Regarding some critical elements, there is a general lack of attention to designing urban structures surrounding the central agricultural belt. Although the connection to the adjacent neighbourhood is not defined, the adaptive design is integrated in an amazing proposal for the sea city interface and a stunning translation of local culture.

The “Embracing city” urban design entry by the KYUDAI is based on a highly comprehensive analysis of the location that resulted with an innovative concept. The jury particularly appreciated the strong focus on the important local/global aspects of water scarcity. Through the use of innovative and climate friendly materials the problems of air-pollution and the objectives of microclimate regulation are also considered. Besides from recognizing the qualities behind the innovative design, the jury also emphasized the slightly uniform character on a larger, urban scale. This further raised the questions of appropriateness of the suggested design solution regarding the qualities that would promote the sense of place, as well as the capacity of the suggested innovative solution to offer an adequate functioning of public urban spaces–in particular regarding the qualities of orientation points, urban identity, and social life. The jury explicitly praises the proposal as the design is very innovative and creative, especially due to the unusual and multifunctional room structures.

Jury Deliberation for other proposals 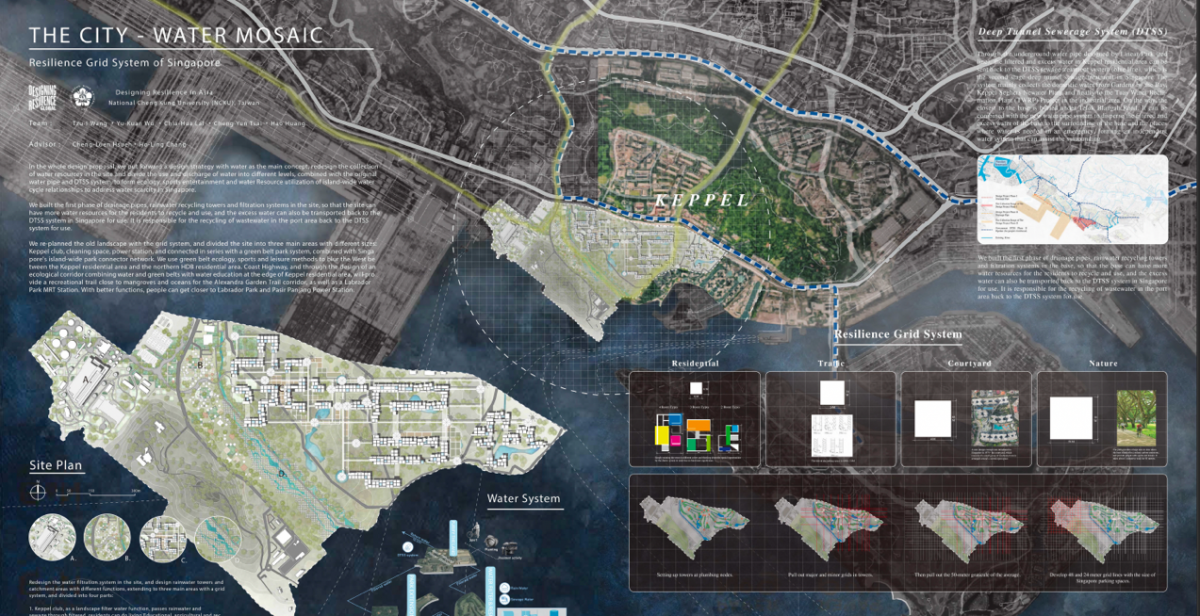 The “The City-Water Mosaic” urban design entry by the NCKU is based on a highly analytical and people-centered approach. The entry considers the local issues and elements of achieving urban resilience on various levels. The jury particularly praises the qualities of thinking on a large-scale that was reactive to the geography and morphology of the terrain, successfully to be translated to the planning area. Although the suggested concept is highly critical towards the element of boundaries as a local specificity of Singapore, the appropriateness of the suggested grid system seems to be a challenging approach to achieving the previously set objectives. The design is highly elaborate and very technical in its nature. The jury discussed the challenges posed by social issues and goals to achieve the social component of resilience. The highly elaborated proposal with innovative elements highly distinguishes the forward-looking design project.

The “On the green” urban design entry by the KMUTT is based on a highly comprehensive analysis of the location that resulted with an appropriate concept. The suggested design promotes harmonization with the surrounding urban fabric, while at the same time suggesting the creation of an attractive and functional new urban neighborhood. The jury praised the consideration of social interactions through diversification of spaces that actively promote mix of the social strata. The entry also reacts to the local environmental circumstances, reflected in the consideration of the conditions during the dry and monsoon seasons. Few critical elements are the lack of landmarks or orientation points in space, possible conflicts between different user groups, and some elements of dealing with diverse aspects of achieving urban resilience. Overall, the design represents a very compelling contribution to the future development of the Sea-City Interface in Singapore.

The “Sea-City Interchange: Vision for A Centennial Forest City” by the BUET is an urban design entry that brings highly inspiring urban design solution and suggestive spatial visualizations, with functional, attractive and at the same time protective park as its central core. The jury particularly praised its adaptive and flexible qualities, such as suggested phases of implementation, architecturally multi-dimensionality and adaptive reuse principles. The design is nature-based, with well elaborated future vision and a large-scale thinking that brings a projection to the future development. Thereby the element of replicability is also well considered. Some of the critical elements are reflected in the general focus on the challenge of sea-level rise, while some other aspects of resiliency would require the same level of attention. The overall design reflects a brave and innovative approach for the sea-city interface in Singapore.