BANGKOK: RE-ENVISIONING THE CHAO PHRAYA RIVERFRONT TO MITIGATE AND ADAPT TO FLOODING AND SUBSIDENCE

The Chao Phraya River has been and is still the most important waterway in central Thailand for commercial and cargo shipping transport to Bangkok and upstream. In addition, the Chao Phraya is a major transportation artery for a network of river buses, cross-river ferries, and water taxis (“longtails”). More than 50,000 people use its ferries every day, and 15 boat lines operate on the rivers and canals of the city, including commuter lines. This strategic relationship with the river has developed the river banks’ landscape as a vertically grown urban center with hotels, condominiums, traditional neighborhoods, industrial buildings and warehouses, solemn temples, churches and civic buildings.

The cost of fast development is not for free, and the city is experiencing many problems due to the effects of rapid urbanization and climate change. 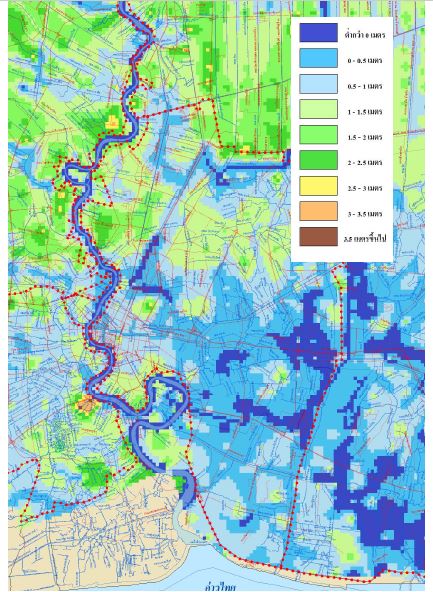 Rapid urbanization and urban population growth in Bangkok is causing the increase of water demand and consumption. As a consequence deep well pumping has been a normal practice in Bangkok for the past 35 years provoking land subsidence. Its impact is particularly critical because of the flat low lying topography and the presence of a thick soft clay layer at the ground surface that augment flood risk and foundation engineering problems, respectively. The subsidence reached its most critical state in the early 1980s when it occurred at a rate as high as 12 cm/year. Moreover, sinking seems to be accelerated by the sheer number, size and weight of all the new buildings pressing down on the land all around Bangkok, according to the NRC committee. 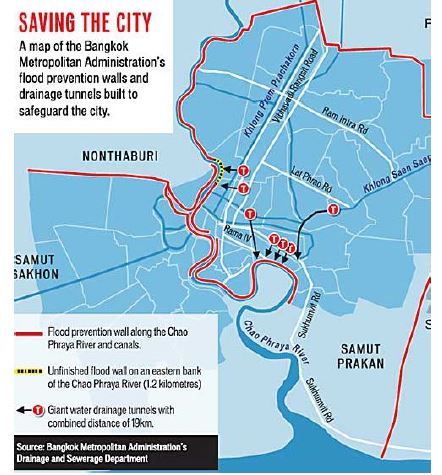 As an effect to land subsidence, combined with sea level rise and the increase of the tropical storms and typhoons, Bangkok is also suffering from flooding, and it might turn from occasional to permanent due to subsidence, which is reflected in many reports that estimate that the city could be under water by 2030.

Although in the last years the city has invested in flood prevention plans and engineering solutions to tackle the problem of flooding building flood barriers, flood prevention walls or water drainage tunnels the city continues to flood.

The river banks of the Chao Phraya, despite having protection walls, are some of the areas under biggest threat and usually the most affected areas during flooding episodes. This is affecting not only an important amount of high value heritage, but also one of the areas of the city with the highest contribution to the local economy.

The flooding and subsidence challenges as consequences of the impacts of climate change add one more level of complexity to the city of Bangkok. that will have to deal also with continuous urbanization, increasing population and the effects of urbanization in the coming years.

• Redefining new programs
What should be the future role of the Chao Phraya riverfront in the city? In front of specialization and to provide alternatives to the increasing population, what are the programmes needed in order to create a mixed-use, integrated, diverse and inclusive neighborhoods? In the innovation era, what can we introduce to the riverside areas in order to keep up with changes, to create resilient, vibrant and innovative districts ready for the future? What are the public uses and facilities needed to support the new population and where should they be located? How can we increase the population density taking into consideration that around 40,000 people and 8,000 housing units will be needed to reinforce the livability and centrality of the riverfront in this sector?

• Redefining urban and architecture typologies and prototypes
How should be the future typologies for the riverfront so that they can tackle with flooding? Which technologies and innovative construction systems can be applied to reduce subsidence? How can typologies contribute and address sustainability and resilience? Which prototypes can be proposed to regenerate the area incrementally while dealing with the combination of activities and uses? How should be the future high-dense and intense typologies in BKK?