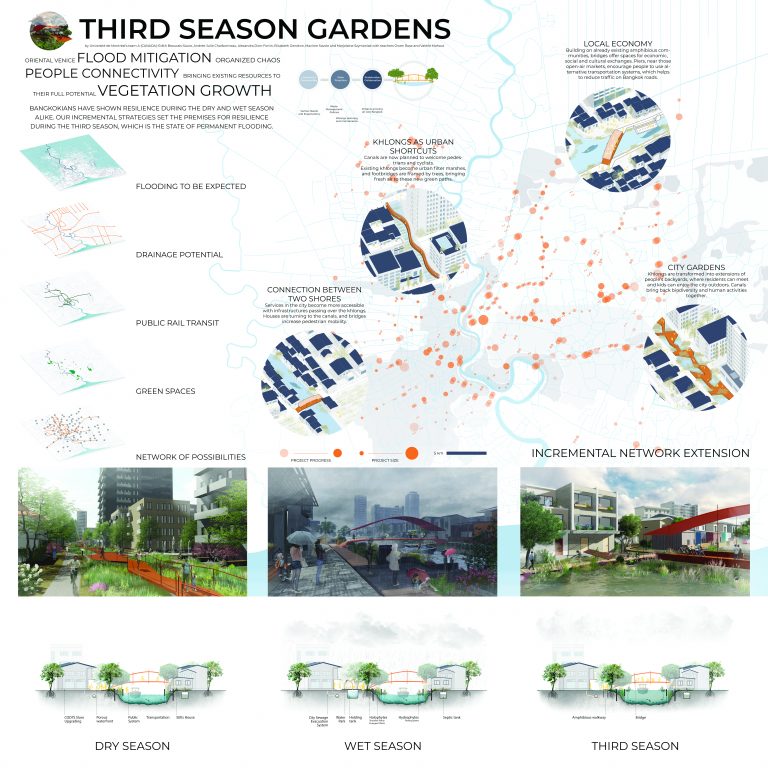 The city’s resilience when facing climate changes is now understood as a series of characteristics which includes practices adaptability as well as infrastructure adaptability. Moreover, it refers to the calm strength of communities which are able to pinpoint their resources and to harness their full potential. This document traces our approach towards the identification of priorities for a resilient Bangkok when facing floods.

The preliminary findings highlight a scientific consensus on the urgency of land subsidence and coastal erosion issues. In addition, we discover that the canals, or khlongs in Thai, constitute a natural network for irrigation which is generous and extended, though its obstruction by domestic waste ruins its potential for drainage. There seems to be a correlation between the canals courses and the establishment of informal communities which are often undocumented and thus, do not benefit from the public waste management system and sewage system. This channels our research towards: sewage treatment with filtering marshes, the existing slum-upgrading programs, the slum as an innovation laboratory, the importance of education to ground good practices and a change in attitude towards climate changes in Thai culture, the challenges in governance coordination; and waste management. The study trip in Bangkok establishes our knowledge of the canals and of the asset the informal economy in khlong communities represents.

We finally decide to rely on people connectivity, flood mitigation and vegetation growth. Basically, we suggest the construction of walkways which could benefit from the existing canals frameworks all the while making it so the canals are no longer obstacles to access services in the city. These walkways could become spaces for the practice of informal economy at all times and for crisis management during floods. Also, they could allow Bangkokians to make peace with their canals, which are a cornerstone of their territorial identity. On another note, we recommend that the clean-up of all canals be taken care of by the city of Bangkok, in the interest of the re-establishment of their potential for drainage, and that filtering marshes be set-up on the edges of these canals, in order to maintain the water sanitized in the long term all the while mitigating coastal erosion.