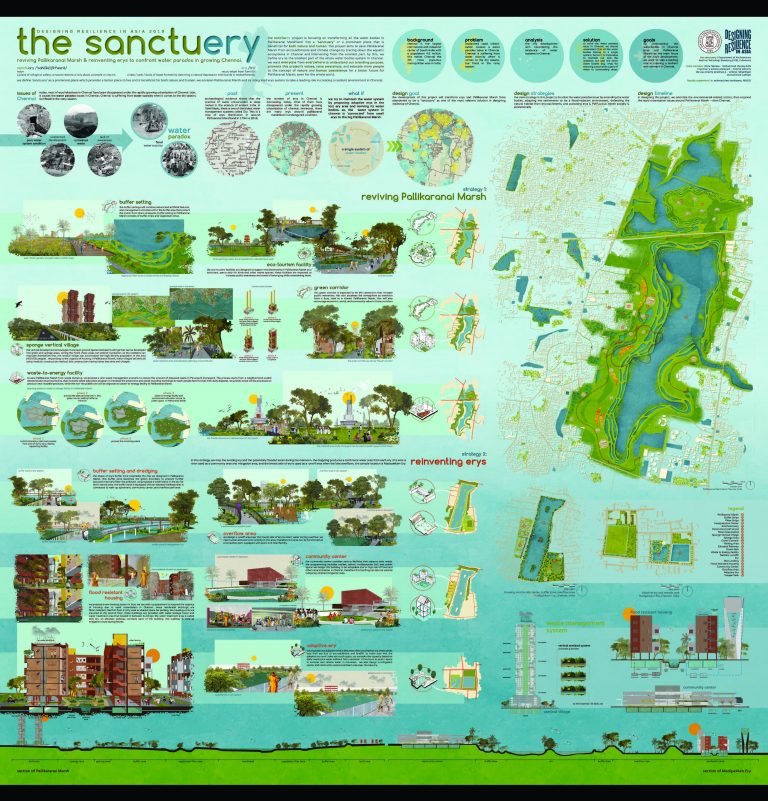 The shrinking of Pallikaranai Marsh is considered a serious phenomenon in the growing Chennai. It affects many aspects of the city and its communities. Unplanned growth in Chennai causes various problems such as, flood, groundwater depletion and salination, water pollution and shrinking of waterbodies -which are mostly and closely related to water. The monsoon season brings in flood, while the dry season results in a scarcity of water. It can be concluded that there is an issue of water paradox.

We should first understand that all the waterbodies belong to a single system. Hence, it is imperative to maintain not only Pallikaranai Marsh, but also the other waterbodies (e.g. erys) surrounding it to deal with this issue. Our proposal, the sanctuery, focuses on transforming all the waterbodies in Pallikaranai Marshland into a “sanctuary”, or a prominent place that is beneficial for both nature and the human being. This project aims to save Pallikaranai Marsh from further encroachments by tracing down the aquatic ecosystems in Chennai, and creating numerous interventions in ery, as the smallest scale of the water system in Chennai. The design strategy of this project consists of (1) Reviving Pallikaranai Marsh, and (2) Reinventing Erys. Reviving Pallikaranai is made up of 5 main tactics- buffer area setting, eco-tourism facility, green corridor, sponge vertical village, and waste-to-energy facility. While Reinventing Erys also has 5 tactics, which are buffer setting and dredging, overflow area, community center, flood resistant housing, and adaptive ery.

This approach is the most feasible solution in India, especially in Chennai to reduce the impact of the water paradox issue. The reinventing erys approach can be replicated in all erys/lake especially in India, while The reviving Pallikaranai Marsh approach could be replicated to all marshland ecosystem. This project will not only reduce the risk of flood, but also improve the quantity and quality of water supply in the city, thus increasing the resiliency of Chennai.