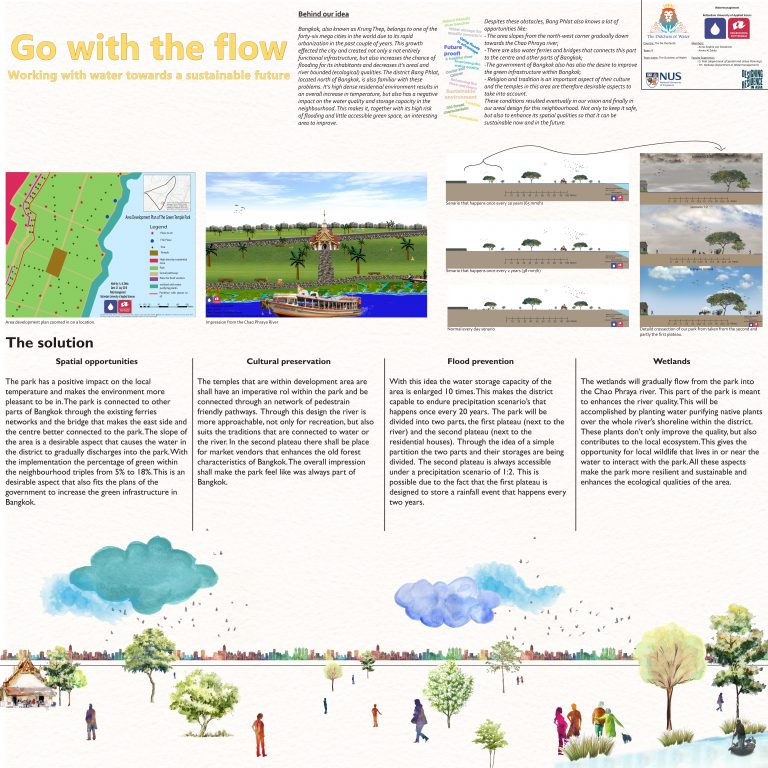 The Dutchess of Water

Bangkok, located within the Chao Phraya river delta, is a rapidly growing city with an infrastructure that is suffering the consequences. Bangkok has turned over the years into a concrete megacity that also brings a lot of consequences like increased temperatures, floods and land subsidence. The changing climate and the small areal slope causes floods to be more harmful in a city that already has to endure floods once per ten years to almost annual. Their forest perspective, religion and water are three main elements that are till tis day well preserved in Bangkok and displays its cities essence. The district Bang Phlat is also familiar with these aspects but distinct itself from other regions trough it’s high risk of flooding, high residential zones (with the increased heat) and predominant concrete environment. The implementation of the “Temple Park” next to the river bench will expand the storage capacity of the district Bang Phlat that will prevent future flood that happens at most once every twenty years. The park and contributes to the quality of the river and has a positive influence on the local temperature. The present temples in the development area shall get an imperative role, together with the enhancement of the typical forest characteristics of Bangkok the park shall feel like it’s really is part of the city. The biggest challenges for the implementation of the Temple Park is the fact that the people that live within the development area need to be moved to another place. The maintenance of the park shall also be a challenge because Bangkok is known for its poor upkeep of its infrastructure. Finally, the safety of the residents is the most important aspect and therefor the plan is a crucial factor for the sustainability of not only Bang Phlat, but also Bangkok.