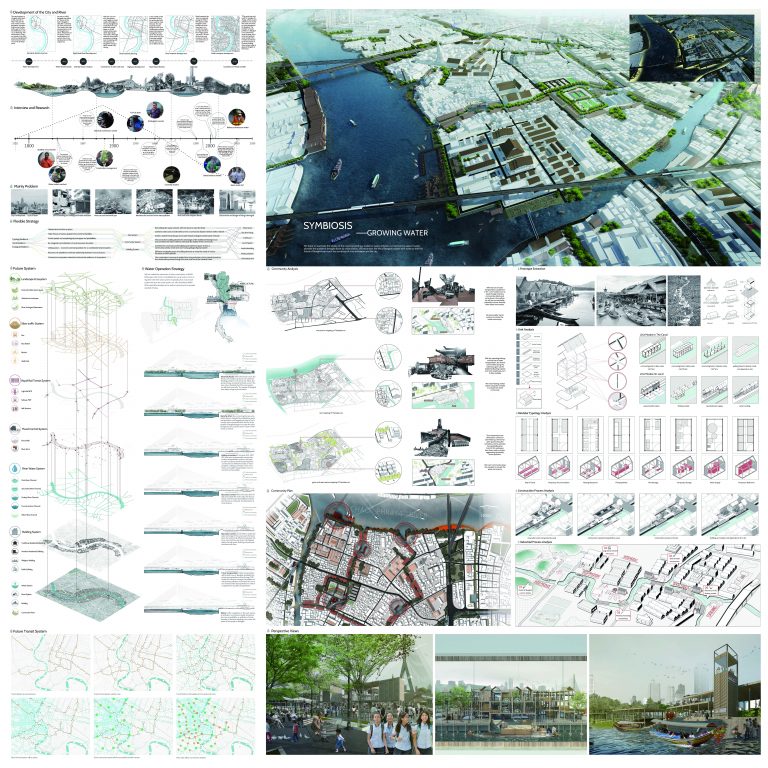 The site is located in Bangkok: the capital of Thailand. It is also the city with the most population, the most developed economy and the most urbanization in Thailand.

Bangkok, which is located in the lower reaches of the Chao Phraya River, is only 15km from the mouth of the sea. And its terrain is so flat with only 1-2 meters average elevation. Therefore, Bangkok is highly susceptible to tides and water levels.

Historically known as the “Venice of the East”, Bangkok has a very developed canal system that strengthens trade, promoting economic development and closely links people’s lives with water. As the most important mode of transportation for residents, water transportation has shaped the urban texture of Bangkok, and it has also produced lots of Bangkok’s forms, such as floating market, houseboats and floating houses.

At that time, people and water live in harmony in the city. Until the intervention of modern urban planning with functionalism in the 20th century, the road based city gradually replaced the water-based city. The connection between people and water gradually weakened, and makes water valueless. It also brings lots of urban problems. For example, the decline of green space rate, land subsidence, water pollution, traffic congestion, disparity between the rich and the poor, and frequently floods. These problems are also aggravated in the context of rising sea levels.

Based on this background, our project aims to enhance the resilience of Bangkok by considering the spatial form, ecological environment and sociology, and to enhance the recovery of Bangkok in response to natural disasters and daily urban problems, to strength the ability to maintain a relatively stable system. This process is actually a dynamic process of evolution.

In order to achieve our goal, we chose the water/canal as an entry point. Through founding water networks strengthening water transportation shaping ecological waterfront、releasing land、sharing facilities which dealing with pollution and responding to floods by community. and through extracting the prototype of floating houses and its materials, we propose to create a flexible building systems that are available both during disaster time and ordinary days .

We hope to reactivate the vitality of the canal by building a resilience water network, re-improve the value of water, alleviate the problems brought about by urbanization, and reconnect the life of Bangkok people with water so that the future of Bangkok can reach the symbiosis of man and water and the city.