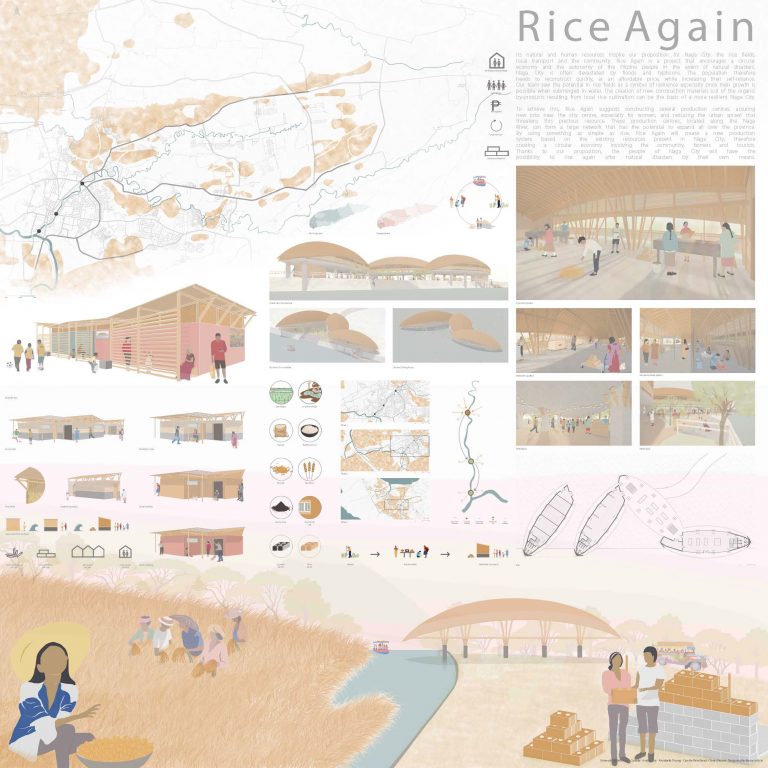 Its natural and human resources inspire our proposition for Naga City: the rice fields, local transport, and
the community. ‘Rice Again’ is a project that encourages a circular economy and the autonomy of the
Filipino people in the event of natural disasters.
In 2020, Naga City suffered from a catastrophic typhoon, causing much damage. In fact, the city is
often devastated by floods. The population, therefore, needs to reconstruct quickly, at an affordable
price, while increasing their self-reliance.
Our team saw the potential in rice fields as a symbol of resilience especially since their growth is
possible when submerged in water. The creation of new construction materials out of the organic byproducts
resulting from local rice cultivation can be the basis of a more resilient Naga City.
To achieve this, Rice Again suggests constructing several production centers, assuring new jobs near
the city center, especially for women, and reducing the urban sprawl that threatens this precious
resource. These production centers, located along the Naga River, can form a large network that has
the potential to expand all over the province.
By using something as simple as rice, Rice Again will create a new production system based on the
existing resources present in Naga City, therefore creating a circular economy involving the community,
farmers and tourists.
Thanks to our proposition, the people of Naga City will have the possibility to rise again after natural
disasters by their own means by:
• Promoting the farmers’ work
• Recuperating rice by-products to create new construction materials
• Enhancing local transport (jeepneys and tourist boats)
• Creating houses designed to resist floods and typhoons
• Responding to the housing shortage in the city
• Bringing the community together
• Offering multipurpose pavilions in order to encourage economic activities, education about self-construction and emergency preparedness