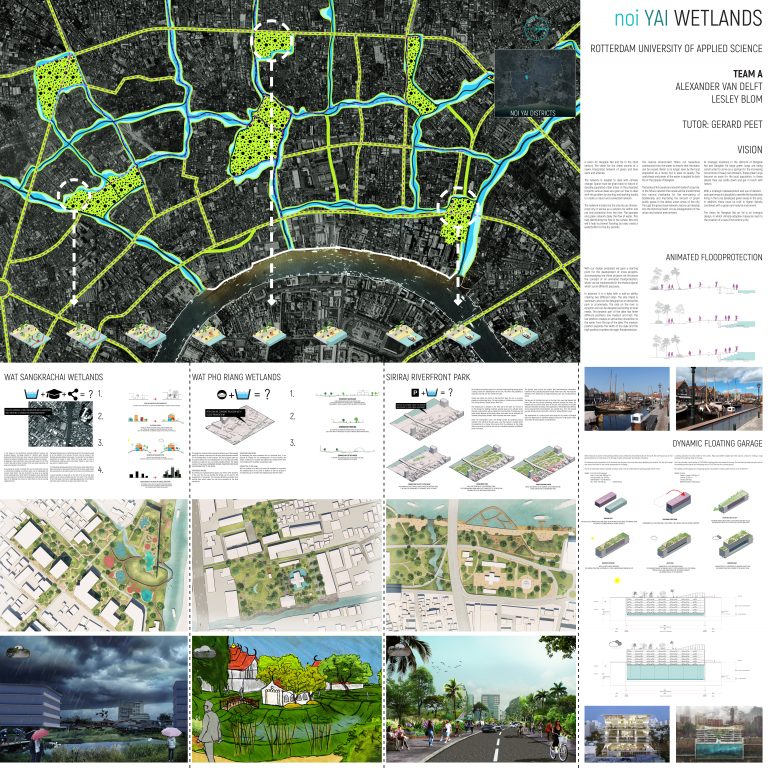 Bangkok is facing several problems in the near future. Through analysis on multiple levels (world, Thailand and Bangkok scale) we concluded that the western riverbank of the Chao Phraya is the most vulnerable for for these problems including rapid climate change. Alongside the riverbank we found various developments for connect the city to the river. These projects are laking the ability to adapt to rapid climate change.

The area of Bangkok Noi and Bangkok Yai are one of the areas where no plans for redevelopment alongside the riverbank occur. This could be a stepping stone between adjacent plans and connecting them alongside the river. The vision for Bangkok Noi and Yai must be an example for redevelopment of urban areas within the city of Bangkok. By creating adaptive and innovative sollutions to deal with rapid climate change, we create new climate proof and lively neighborhoods.

The noi Yai Wetlands plan focusses on creating new value for the neighborhoods. By combining different social functions and redeveloping wasteland we create new green sponges to prevent the areas from flooding and adding new public space. We start the development with 3 small pilot projects; Siriraj hospital, Wat Pho Riang and Wat Sangkrachai school. Here we combine functions such as education and healthcare with adding new green spaces and floodprevention for the areas. These project will serve as a kickstarter for creating a new greennetwork through Bangkok Noi and Yai. This network will function as a connecting element between the adjacent neighborhoods and natural rural areas increasing the biodiversity within the city.

With the noi Yai wetlands proposal we aim to create a new sustainable and resilient urban area for Bangkok Noi and Yai. The vision reconnects the areas with nature.