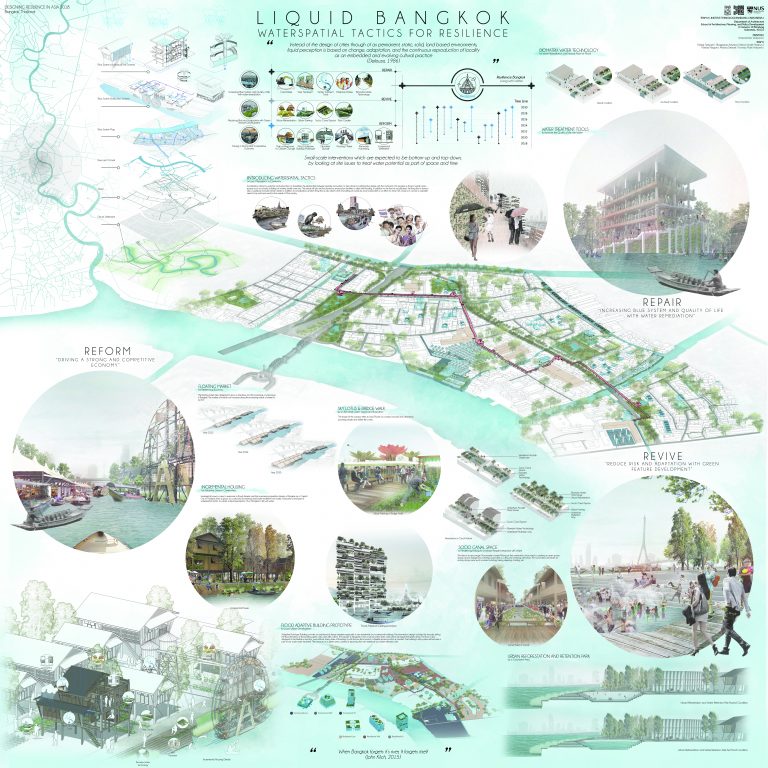 Our proposal is to gradually re-introduce the people of Bangkok to water urbanism, while taking into account the potential disasters and the rapid growth of Bangkok’s development.

To do this, our proposal offers a waterspatial approach by creating a matrix that generates small

This is to achieve a liquid perception in Bangkok, so that Bangkok becomes adaptive, sustainable

and dynamic. The current, strong solid perception in Bangkok’s development have contributed to

For that reason, in the early stages it is very important to change the orientation of Bangkok community who started leaving the canal system. This can be achieved through socialization and workshop which allows the community to participate in design processes.

Canal improvements are important for lifting water potential by purifying water, collecting and absorbing water through the addition of areas of water catchment and recharge while activating the green belt in the area. It will also allow water that has been accommodated and purifying can be used by the people of Bangkok, from the smallest scale of the house to the urban water system.

Given the livelihoods of Bangkok’s livelihoods as traders, we made several interventions to improve the economy through designing markets, as well as preparing economic facilities to anticipate emergencies such as floods, so that community activities may continue to run under such circumstance.