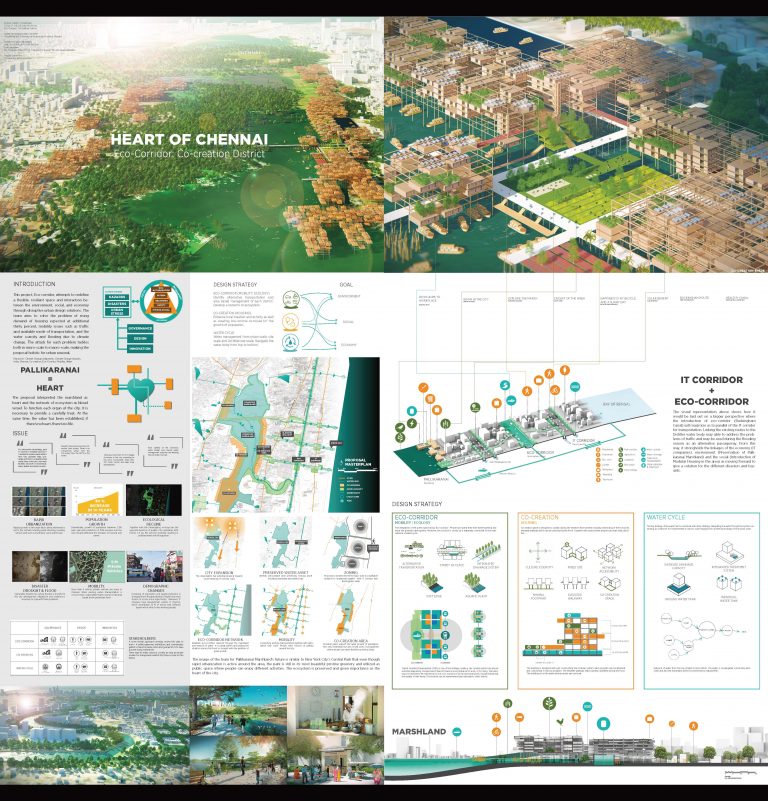 This project, Eco-corridor, attempts to redefine a flexible, resilient space and interaction between the environment, social, and economy through disruptive urban design solutions. The team aims to solve the problem of rising demand of housing expected at additional thirty percent, mobility issues such as traffic and available mode of transportation, and the water scarcity and flooding due to climate change. The attack for each problem tackles both in micro-scale to macro-scale, making the proposal holistic for urban renewal.
Since the introduction of the United Nations’ New Urban Agenda, a co-creation and living idea for Chennai emerged for embracing equity and development at all levels of human settlements, specified guidelines and policies can take advantage of urbanization across physical space, linking the urban, peri-urban and rural areas to accommodate the expected immigrants.

Adaptation and abatement options are highly needed to combat climate change, the sharp impacts of torrential rain and drought on local stakeholders were observed and analyzed concerning transportation, housing, and other issue areas. Without adaptation, effects will also increase. By ‘cutting’ certain cause-effect relations, its after-effects can be reduced, and any such measure can be regarded as an adaptation option.

In order to protect the urban area from climate change, infrastructure should bolder up and jive with the extremities of the weather condition—draught and flood, since this area is considered to be a coastal city. The proposal for the inter-modality of the city with or without the disasters got laid out in order to mitigate economic loss and disruptive changes.

Moreover, it is urgent to solve these problems to bolster economic progress as Chennai is considered a leading commercial center for automobile, software services, petrochemicals, financial services, textiles and hardware manufacturing.