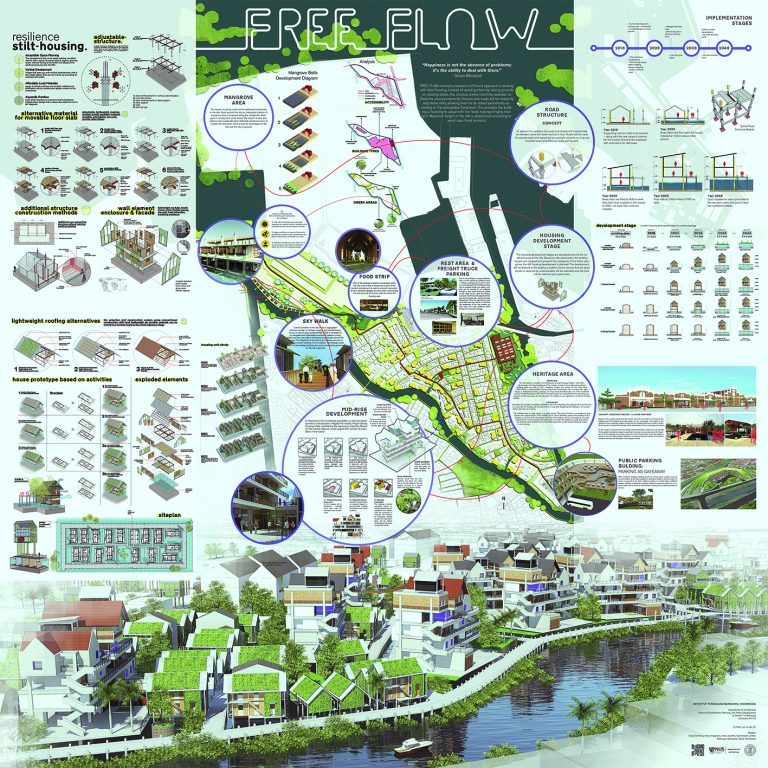 The site is located at the northern coastal area of Semarang, the area prone to tidal flood and land subsidence. The area comprises of different components such as housing, heritage building, and industrial warehouses. The disaster affects each of the component differently, however, each of the component also has its own potential pertaining to resiliency.

Our approach is to address the issues based on the worst case scenario.  We would first identify the problems and project it to the worst scenario that could happen. In response to that, we proposed a concept of ‘Free Flow’. The concept emerge as a response to the current solution done by local government. Currently, the local government react to the problem by raising the road level. However the solution is far from resilience. By raising the road level, the resident have to raise their house ground floor to match the road level, unfortunately not all the resident could afford to raised their house, resulting in some ‘sunken’ houses at the site. On the other hand, in a long term the material used to raised the road could also cause an environmental problem for the area where it was sourced. It is therefore our proposal is based on the idea not to deny the problem, instead, we could adapt to it and in long term would be more resilience, hence the ‘Free Flow’ concept.

The Free Flow concept translated into architecture and planning as an integrated water sensitive development. Each components of the site, i.e. housing, heritage, industrial warehouses, etc. are developed based on the water sensitive development approach. Further to that, the components are also planned and designed to be an integrated system in a way that it is not only developed the physical elements but also to develop the social  and economic system.