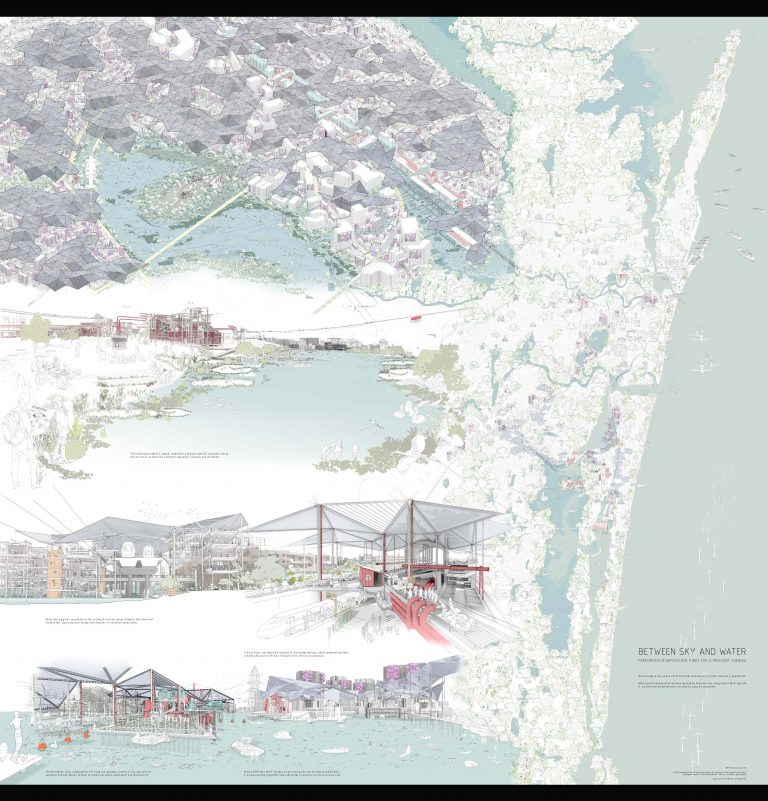 Between Sky & Water — Performative Infrastructures For A Resilient Chennai

In order to address the issue of resillience in a meaningful way, we have situated our scheme in the not so distant future of Chennai. As conservative estimates of the effects of climate change predict a sea level rise of one meter by the year 2100, how do we begin to reconcile strategies for change in Chennai’s future tomorrow?

At the heart of this project, we attempt to deal with the reality of the scope of what it means to design with resilience. Coastal, climate, cultural, urban, and economic resilience.

Although climate resiliency is the marriage of a large landscape of factors at multiple scales (social, economic, technological, political, infrastructural), at its core, the residents themselves have the ability and knowledge to best prepare and adapt to the issues they see in their own communities.

Chennaites have lived through an ongoing battle with water. The intensity of summer leaves the city in drought and over four million residents thirsty. However, in the monsoon season, the rain is relentless, and as seen during the 2015 floods, can prove to be fatal.

History has shown us time and time again, that we cannot continue to battle nature with hard infrastructural defence alone – walls, gates, seawalls and barriers are not infallible. On the contrary, during massive rain events, coastal defenses—designed to prevent surge flooding from the ocean—prove useless and may even exacerbate inland flood damage.

There needs to be a different approach as we enter an age of unprecedented climatic conditions.

In addition to the changing climate, urban reslience requires looking at the city holistically: understanding the systems that make up the city and the interdependencies and risks they may face. For example, economic resilience forces us to analyse how Chennai’s residents organise themselves, as the microeconomies are just as important as the industries that anchor the city.

Thus, it is through the act of empowering the residents, that communal and cultural resilience begins to take shape. Through the celebration and enrichment of a city’s cultural identity, the role that civic spaces play in facilitating events, festivals and places of convergence are highlighted as essential to the urban fabric.

By strengthening the underlying elements of a city and better understanding the potential complications that will arise, a city can exercise its agency and enhance its development trajectory to ensure the well-being of its citizens.

All of these approaches must be combined to form a comprehensive strategy for Chennai’s future.