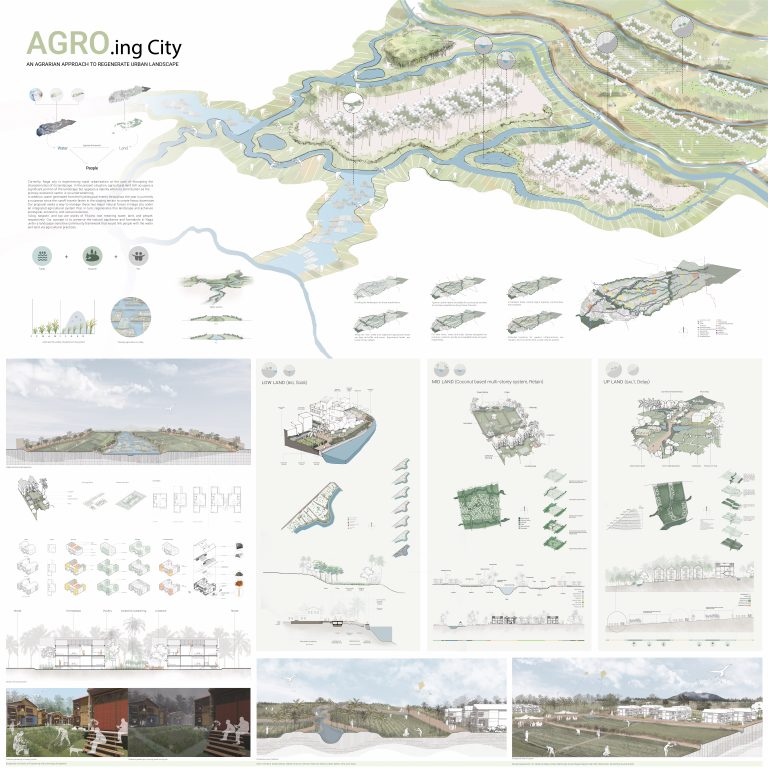 In the face of imminent climate change, the climatic and geographic location of Naga city dictates its susceptibility
to the impacts of sea-level rise and the heightened intensity of all the regular hydrological events. Therefore, agro.ing city is a proposal that seeks an ecologically, economically, and socially viable way to mitigate the impact and adapt to these changing situations with agriculture as its primary
driving force.
Nestled at the foot of Mount Isarog, the city gradually slopes down towards the west. It is trisected by the Bicol and Naga rivers fed by creeks and capillaries crisscrossing throughout its landscape. With heavy to moderate precipitation for nine months a year, the city center at the basin area of this trisection experiences devastating floods and frequent water clogging every year. These incidents cause massive disruption in the urban and economic systems. The reports also show the city’s primary economic sector, agriculture suffering heavily and turning a meager output in revenue.

Farmlands and capillaries are a significant and integral part of this landscape. However, these elements are addressed very poorly in the existing urban system, especially when the city is growing very fast. The booming demand for housing accommodation also needs to be met. Hence the current scenario shows a very business and service-centric rapid urbanization at the cost of arable lands with little to no sensitivity to the natural landscape, especially the creeks and capillaries flowing through this land.
The vision for Agro.ing City is to mitigate, adapt and reinstate the effects of climate change in Naga City through a comprehensive landscape strategy and water management system in different scales. The proposal
acknowledges the existing farmlands and capillaries as an integral part of the overall hydrological system and seeks answers to housing needs and further growth without interrupting these systems. It suggests an integrated
framework that is landscape-sensitive, economically viable, carbon-efficient, and replicable.
To achieve our vision, we subdivide the landscape according to topographic slope and hydrologic movement. Hence, it can be called upland, midland, and lowland, which are also: source, transmission, and basin areas, respectively, for this watershed. In these areas, the existing monoculture farming practices are prescribed to be replaced with landscape-specific integrated farming techniques so that these practices can contribute to soak, retain, and delay runoff water at sources. These practices adopted primarily to increase agricultural production can also contribute to the spontaneous development of vegetation along the capillaries, resulting in revival. The same vegetation layer can also act as natural windbreaks for typhoons. At major slope variations, vast agricultural lands have been preserved as valleys that can retain runoff in case of major hydrological events. Within these natural buffers, communities have been linked strategically with the landscape allowing them to utilize these buffer elements for community needs and means for alternate income activities, such as Agro
Ecotourism and Farmers’ markets.
We believe the way forward for Naga is not to become just another metropolis but an inclusive city that understands and utilizes the potential of agriculture to maintain and regenerate an urban landscape to be adaptive and better prepared against climate change. We strongly believe our proposal Agro.ing city will suggest a framework towards that path.