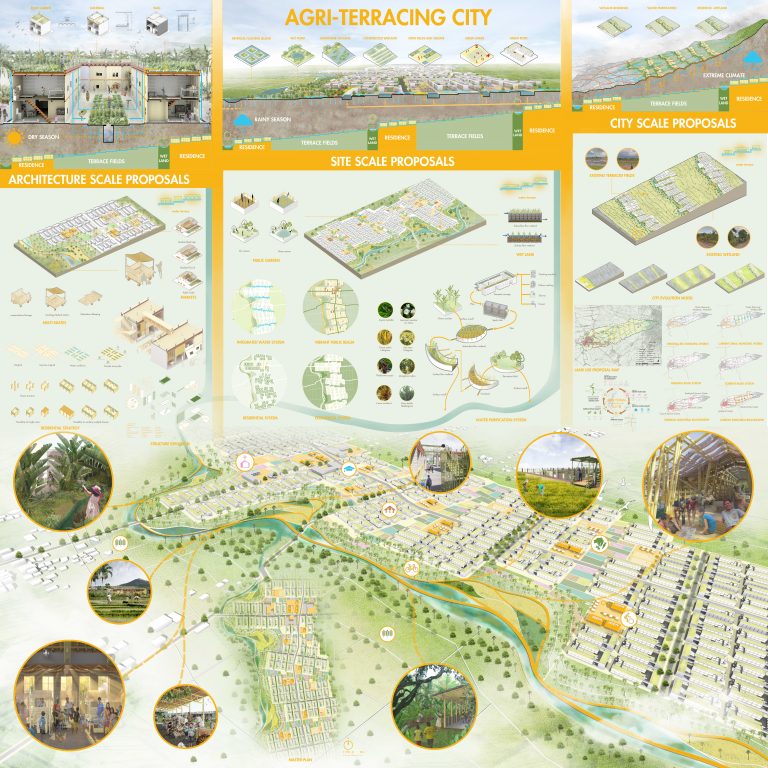 Naga is a city growing at the foot of a volcano. Its fertile soil and rich history make Naga a famous pilgrimage city in the Philippines. However, subject to the topography of sloping land, and the lack of municipal water conservancy facilities, the original terrace in central and eastern regions was gradually abandoned, caused the frequent flooding of the city, which seriously influences the productive life of the Naga people and normal operation of the city. At the same time, the loss of farmland in urban areas and the influx of informal settlers further increased the burden on
Naga’s government. Therefore, we focus on the three major factors of water resources, agriculture, and population, hoping to alleviate the current urban contradictions in the form of the revitalization of terraces in the central and
the eastern part of the city.
By improving the urban road network, we put residential wetland complex strip in the original terraced terrain of the city, and through the introduction of population and the intervention of transitive miniature municipal water
conservancy facilities, we revitalized the abandoned wastelands into farmland, enhanced the climate resilience of Naga, and revitalized agriculture so that residents could have more sources of income.
We hope that through the new mode of Agri-terracing city, Naga will no longer suffer frequent floods, so that the residents of Naga will have a more prosperous and happy life, and the future of Naga will be promoted step by
step just like terraced fields.