(ONLY OPEN TO PARTNER UNIVERSITIES)

The annual DRIA international design competition encourages foresighted urban and architectural design proposals, as well as promotes innovation in building technologies to insure a specific community’s resiliency particularly prior to and during a disastrous event. A different community in Asia is picked every year as the competition’s test site through careful joint research efforts of the School of Design and Environment, National University of Singapore and its network partners.

Located on the low northern coastal plain of Java Island, Semarang’s administrative boundary covers an area of 373.70 square kilometres, the fifth largest city in Indonesia. Together with five other neighbouring regions (Kendal, Salatiga, Demak and Grobogan), Semarang forms the Kedung Sepur area, one of Indonesia’s National Strategic Areas where urban planning is prioritised due to its importance in national defence, economy, social, cultural and environmental roles.Semarang was the centre of the United Dutch East Indies Company (Vereenigde Oost-Indische Compagnie, VOC) in the 17th and 18th centuries, an important trade centre, second only to Batavia (present day Jakarta).

Almost one-third of the Kedung Sepur’s population lives within Semarang City which experiences an annual growth rate of approximately 1.4% in the period 2005-2010. It is predicted that by 2030, the population of the larger Semarang Metropolitan Area (SMA), made up of Semarang City and District of Semarang, will reach 7.156 million inhabitants, in which about 36% living in the city of Semarang. Despite this growth throughout the region, the rate of population growth in the Semarang City has been higher than surrounding areas. This indicates the city’s importance in attracting migrants from the surrounding areas, as well as marking its status as the region’s core city. The city is currently inhabited by 1.76 million people (2015), making it Indonesia’s eighth most populous city. Not only does the city’s population growth been consistently positive in the past 30 years, it also enjoys constant economic growth. These in turn place additional pressures on the existing environmental and infrastructural resources in the city. Most of the migrants attracted to Semarang City settle down in the poorest kampong areas with majority located in the city centre. Compared to Semarang District, Semarang City has a higher concentration of residents and population densities, reaching more than 23,000 people per square kilometres.

THE COST OF DEVELOPMENT: DROUGHTS, SUBSIDENCE AND FLOODING

The economic growth that Semarang City enjoys has often been at the expense of existing eco-systems and community systems.Indiscriminate development on the hills south of the city has resulted in serious monsoon flooding in low-lying areas. Excessive coastal land reclamation has caused tide water inundation in areas near the coast, including the historic old port town. Over-exploitation of the ground water for industrial, commercial and residential purposes has caused acute land subsidence in many parts of the city, as well as sea water intrusion reaching up to several kilometres inland. The Semarang Metropolitan Area faces a number of potential hazards related to climate change. Rising sea levels in the low-lying coastal areas pose a substantial threat of increased flooding. This risk is further magnified by changing weather patterns, which extend the length of the wet season and increase the intensity of the dry season. This phenomenon results in more frequent droughts. In addition, changes in depleting groundwater levels are likely to undermine the stability of land. 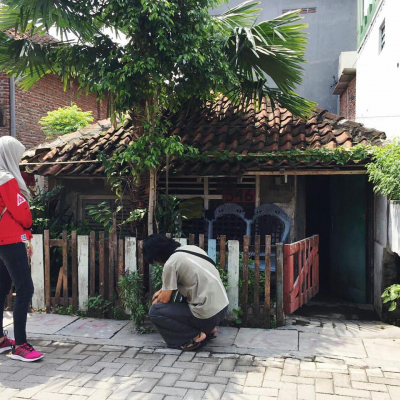 ‍The competition site, Kampung Kali Bahru, is located on the south west part of Bandarharjo. Bounded by Jalan RE. Martadinata at the north, Jalan Lodan Raya and Kali Semarang, the Semarang River at the west, and Jalan Yos Sudarso and the Kalibaru at the east, the area is particularly vulnerable to various hazards, shocks and stresses related to climate change such as tidal flooding, land subsidence, sea-water incursion and rising sea levels, risks that threaten and take place frequently in the neighborhood. 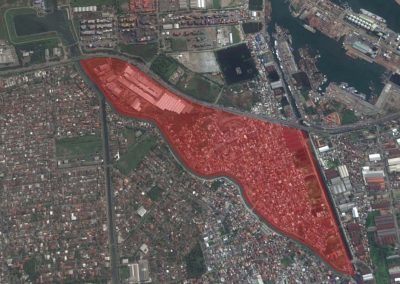 Competing teams will prepare their design solutions and innovative responses to these complex shock and stress affecting Semarang city community located in Indonesia. More specifically, the teams are to propose alternative and innovative solutions to the challenges of droughts, water scarcity and lack of infrastructure, subsidence and flooding that affect Kampung Kali Bahru. Teams are to consider the following aspects:

– Propose solutions for the Heritage. The importance of the identity and heritage elements proposing their integration and rehabilitation and suggesting programs or future uses for the community and/or the city.

– Provide adequate housing solutions. Investigate solutions for the existing housing stock as well as for the new housing proposals in order to provide better living environments tackling the environmental challenges.

– Propose solutions for a mixed-use neighborhood. Provide a live and work environment where employment opportunities are created and local activities can coexist with city-scale uses. Proposals should explore the role of the neighborhood in the city due to its strategic location and its relationship with the harbour, the proximity to the train station and the city centre, and the very good connectivity of the area with the rest of the city and the airport.

– Propose solutions for a resilient mobility- Provide the area and the city with better solutions to solve the mobility of people in order to increase integration and reduce inequalities.

SUBMISSION OF COMPETITION PRESENTATION AND VIDEOS

OPENING OF DRIA 2017 AND SYMPOSIUM